Deprecated: __autoload() is deprecated, use spl_autoload_register() instead in /home/ultimateauto123/public_html/functions/PHPMailer-master/PHPMailerAutoload.php on line 45
 Auto Shipping Tips to Colorado 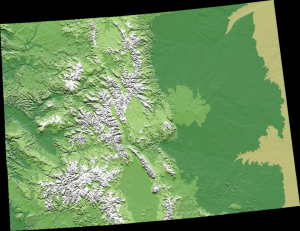 The state of Colorado is large in terms of total area, but because it is split in two by the Rocky Mountains, moving anything in or out of most parts of the state can be difficult. Denver, the largest city in the state by population, sits on the eastern side of the Rocky Mountains and is home to a vibrant metropolitan area that includes cities such as Boulder, Littleton and Lakewood. Denver itself has a population of over 634,000 residents, a bit more than a tenth the population of the entire state. Other major cities east of the Rockies in Colorado include Fort Collins, which sits north of Denver; Colorado Springs, which sits a bit south, and Pueblo, which sits further south than Colorado Springs. This creates a lengthy urban sprawl along the eastern foothills of the Rocky mountains, which certainly helps when it comes to getting to and from the area.

Aside from the mountains in the middle of the state, there are few major interstates that service Colorado, with perhaps the most well-known being I-70, a major east-west corridor that goes right through the heart of the Rocky Mountains. The stretch of I-70 through Colorado has been considered an engineering marvel, with stretches of road including the Eisenhower Tunnel under Loveland Pass, the stretch through Glenwood Canyon, as well as Vail Pass. It runs straight through Denver, but because of where it goes in the Rocky Mountains many auto transporters try to avoid those stretches of I-70. Typically they'll use it when transporting vehicles east of the passes, for instance from Denver to somewhere east of it, and while some may run through the Rockies many that do will charge more for those services. As for north-south interstates, I-25 is the main one, running through most metro areas in Colorado including Pueblo, Colorado Springs, Denver and Fort Collins on its way from southern New Mexico into eastern Wyoming.